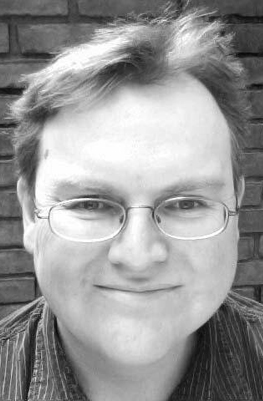 A specialist in the cultural history of journalism and media, Fuhlhage is the author of Yankee Reporters and Southern Secrets: Journalism, Open Source Intelligence, and the Coming of the Civil War. The American Journalism Historians Association has selected him for the 2020 National Award for Excellence in Teaching, and he has co-authored several journalism and media history projects with graduate students.

If you are interested in joining his research gang, please email him at fr1136@wayne.edu. Projects are constantly in the works on issues and eras ranging from the anti-slavery press of the 1840s to reporting on the Civil Rights Movement in the 1960s.

Fuhlhage has many years of experience as an editor, designer, and reporter on news, sports, and features. His experience includes work at The Santa Fe New Mexican, Des Moines Register, Columbia Missourian, Palm Springs Desert Sun, and Lawrence Journal World.

"I grew up in family where we all gathered in the living room on Sundays and shouted at the TV during Sunday-morning news shows such as Face the Nation and Meet the Press," he recalls. "Combine that interest in public affairs with a love of writing and you get an aspiring news editor.

"Professional experience during the rise of online journalism informs my teaching of reporting, news writing, editing, and design. Want to write about public affairs? Sports? Business? Lifestyles? Food? I’ve worked in all those departments, and I’ve been part of hiring decisions in professional newsrooms. That gave me the experience to show you what you need to do to succeed as a journalist.

"I treat my classroom as if it were a newsroom. When you take my news reporting course, you go out into the community and cover events, conduct interviews, write issue stories, learn to use social media platforms and curation tools to gather information and cultivate sources. You’ll learn the importance of getting it right as well as getting it fast. You’ll learn to fix your own errors. You’ll learn to write and think like a professional journalist."

Third-place Top Faculty Paper: "A Know-Nothing's Portrayal of Mexicans in the 1850s Press: The Work of G. Doublas Brewerton," Association for Education in Journalism and Mass Communication, San Francisco, 2020.

Top Paper: Wally Eberhard Award for the Outstanding Paper on Media and War, "The Evolution of the Mexican Image in the Reporting of George Wilkins Kendall of the New Orleans Picayune, 1841-67," American Journalism Historians Association, New Orleans, La., 2013.

My research examines newsgathering in the nineteenth century, the evolution of news coverage of Latinos and Latino immigration and the ways cultural identity shapes journalists’ perception and representation of minorities. I am primarily a media historian but also study contemporary media portrayals of Latinos. My most recent contemporary project examined differences in wire service and local coverage of Latino immigration in a rural community. I'm intrigued by big historical problems, starting with how the evolution of mass communication networks influences the flow of ideas. One example is my work on the ways the Southern press portrayed Mexicans in the nineteenth century. My most recent publication elucidates the interplay between a journalist's social identity, the material he wrote about the anti-slavery movement in Bleeding Kansas, and the ecosystem of abolitionist news, information, and opinion in the 1850s. I'm now working with a team of graduate students to map the flow of news during the Secession Crisis in 1860-61.

History of American Journalism and Media