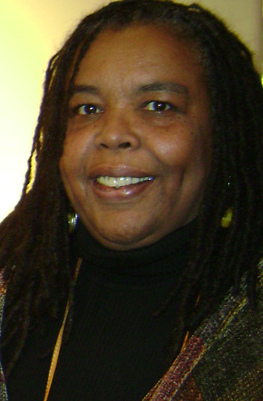 A native of Detroit, she has previously held the positions of Producer/Director and Production Manager at WSIU-TV (Carbondale, IL), Executive Producer of Cultural Affairs and Special Projects for WTVS-Detroit Public Television, and Series Producer for WGBH-Boston. A long-standing advocate for minority participation in public broadcasting and for independent media, Anderson has served on the Board of Directors of the Independent Television Service (1998-2005), and was a co-founder of the National Black Programming Consortium. Anderson is also a past president (1989-1991) of the National Conference of Artists (NCA), the nation’s oldest African American Arts organization, and is currently a member of NCA-Michigan Chapter’ Board of Directors.

Her areas of interest and expertise include independent film/television, media diversity, public television, African American/African world culture and history, urban affairs and the arts. She is also an accomplished still photographer whose work has been exhibited internationally and is included in the permanent collections of Southern Methodist University and the Mott-Warsh Collection.

Most proud of:  the awards her students are winning.

Passion:  the arts—all of them and in any combination.

As an independent producer, Juanita Anderson's work is primarily designed for national public television broadcast and for exhibition in public spaces. Her work is concerned with the creation of stories and images that stem from the experiences of people of African descent, that give voice and representation to America’s diverse and underrepresented communities, that examine the role of the arts in society, and that stimulate community engagement and social action.

As an executive producer, Anderson has launched more than 25 station and independent projects into the national PBS schedule and has guided the work of nearly 40 independent producers across the nation.  In addition to seven regional Emmys for her work in local public television, Anderson’s work has garnered numerous national awards including the prestigious George Foster Peabody Award and a DuPont Columbia Silver Baton for excellence in broadcast journalism.

Anderson’s recent body of work includes the Favorite Poem Project: Chicago and the Favorite Poem Project Video Anthology (executive producer, producer/director), commissioned for the bicentennial celebration of the Library of Congress. Her documentary short film 18th and Vine: A People’s Journey is on permanent exhibition at the Museums of 18th and Vine in Kansas City, MO. Her teaching specializations and interests include film/video production, cinematic language, documentary studies, and African world cinema.