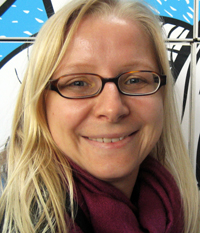 How do you increase women’s civic and political participation?

That's the question Assistant Professor Stine Eckert will answer this fall as part of a 7-person research team after being awarded Wayne State University’s first-ever research grant from the United States Agency for International Development (USAID) in June.

"It’s been established that in order to have a stable democracy, you need to bring women and minorities into governance, into decision making and into leadership positions. And we also know worldwide women are not on parity in government representation. Women always have to over-qualify to be on par with men." Eckert says.

"Our project focuses on providing practical knowledge to USAID so they can supply new data to people on the ground, like NGOs, to really change the world so that women can participate more."

Established by President John F. Kennedy in 1961, the USAID operates in more than 100 countries worldwide, implementing humanitarian projects to promote democracy, freedom and human rights. Examples of these projects include initiatives in governance strategy, agriculture and food security, and ending extreme poverty, to name only a few.

To obtain the useful data they need to carry out many of their programs, USAID often enlists universities for assistance through research grants.

To supply USAID with useful, robust data, Dr. Eckert and the Wayne State team will spend the next four months content analyzing existing research in various databases on women’s civic and political participation in USAID-related countries. She says the team has compiled an extensive list of studies and has already evaluated more than 200 of them.

Dr. Eckert says the team is zeroing in on what governance methods and strategies have already been used in these countries and what the results of those methods were.

According to Eckert, gender quotas in political parties and in parliamentary bodies have emerged as one of the more common tools used in USAID countries such as Ghana India, South Africa and Mexico.

Dr. Eckert says other studies are more descriptive and measure not only how many women are in a governmental body, but how people perceive women in government.

From there, Dr. Eckert says the team will vet the findings of these studies to see if they apply to the right countries for a specific project and to ensure the studies were rigorous enough in terms of method.

"Our job is to find out does that work in every country? Does it work in more authoritarian regimes or developing democracies?" Eckert says. "The idea is to translate research that is often very academic in language into a synthesized summary so that people on the ground can use it in various countries."

The USAID will conduct more research based on the Wayne State University team findings, but she says her team’s work is vital to the project because they can tell USAID which governance strategy tools are worth pursuing in the first place.

Dr. Eckert says she is excited to contribute to this project since it overlaps with much of her previous research on how women are represented in formal media structures and how women and minorities use social media.

One of her most recent projects is the Wikid GRRLS Project, which focuses on teaching middle school girls a variety of online skills, including how to write and edit articles on Wikipedia.

"All of this is an outlet for minorities and minority women to be part of a conversation if they aren’t otherwise part of a formal media structure. It’s about finding out how can we make a fairer playing field to have every voice taken into account?," Eckert asks. "It makes democracy better if you have these different voices, and women are such an obvious choice because we’re half of the population. And then even in women there’s a lot of different perspectives. It helps us find richer and better solutions to problems."

Dr. Eckert says one of the more challenging aspects of the USAID project thus far has been the tight time frame her team has been assigned. Eckert’s team will be flying to Washington D.C. in September to present their findings up to that point to USAID.

"The September trip will include meeting with reps from the Institute of International Education (IIE) and USAID, as well as other working groups addressing related research questions," Eckert says. "We will take the feedback from that workshop and refine our work from there."

The project’s final report will be presented to USAID and IIE representatives in Washington D.C. in December.

Other recent works completed by Dr. Eckert include three book chapters on feminist uses of social media; on feminist Twitter, and on experiences of women bloggers in the U.S., U.K., Germany and Switzerland.

In the fall, Dr. Eckert is hoping to kick off a graduate course focusing on a study to interview Muslim-Americans in Detroit regarding their use of social media to respond to a climate of Islamaphobia.

For more detailed information about Dr. Eckert, her research and her publications, visit her website.

This report is made possible with support from the American people through the United States Agency for International Development (USAID). The contents are the sole responsibility of the authors and do not necessarily reflect the views of USAID; the United States Government; or the Democracy Fellows and Grants Program implementer, IIE.