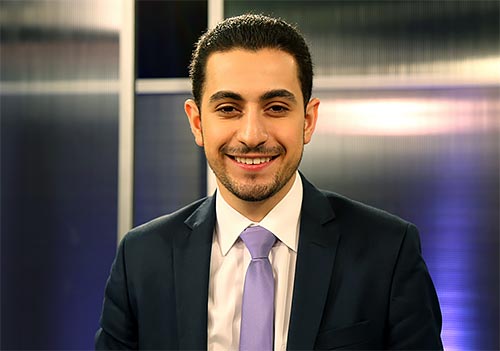 From UNITY: Journalists for Diversity announce that Charlie Kadado, a junior at Wayne State University in Detroit, has been named UNITY’s 2016 reporting fellow.

Kadado, who is majoring in broadcast journalism, was chosen out of very competitive group of applicants to represent UNITY at all of the journalism conferences focused on diversity.

"This is a unique, once-in-a-lifetime chance to connect with major outlets, meet influential professionals and learn how journalists can more accurately represent the communities they serve," said Kadado, who impressed judges with his maturity and dedication.

"As an Arab-American, I understand why underrepresented communities negatively perceive the media. But I think dialogue and tolerance can fix this. This fellowship means a lot because it stands for better storytelling by fairly including the diverse groups which make our country so unique."

Kadado will work on student project at each convention, get extensive training and have professional mentors guide him through the fellowship program.

Former recipients include Melanie Balakit, currently an education reporter at the Tennesseean, and Raji Ramanathan, a junior digital editor with NBC. In addition to college duties, Kadado works part time as a reporter for Shelby TV in Macomb County and runs his own website for Lebanese-American news coverage.

Charlie Kadado is a junior broadcast journalism student at Wayne State University in Detroit. He is a member of the Journalism Institute for Media Diversity, a nationally-acclaimed honors program which promotes diversity and inclusion at WSU. Kadado works as a reporter for Shelby TV, the local news station in Macomb County, Mich., where he covers courts and breaking news. His professional experience includes working as the online editor for Lebanese Examiner, a multicultural publication for Lebanese Americans, where he helped grow its circulation by 25,000.

He also covered the widely reported trash crisis and mass protests in Beirut in August 2015. Kadado developed an early interest in journalism in 2008 after working as a Kid Reporter for the New York-based Scholastic News. In his free time, he enjoys keeping up with daily news, traveling and photography. Kadado expects to graduate in winter 2017.

UNITY Journalists for Diversity is a strategic alliance that: