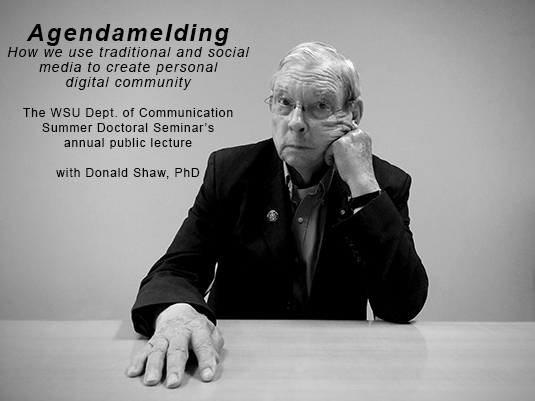 When it comes to politics, the media "tell us what to think about, but not what to think" has been the accepted--and documented--research finding for most of the last four decades.

But, social media is now influencing that process, according to Donald Shaw, Ph.D., whose research has explored the relationship between news and voter opinion about important issues of the day for more than 40 years.

A pioneer in agenda-setting theory and Kenan professor emeritus at University of North Carolina, Chapel Hill's School of Media and Communication, Shaw discussed the topic from his unique perspective at the Wayne State University Department of Communication Summer Doctoral Seminar’s annual public lecture on June 14.

About 40 people, including doctoral students, attended "Audience Agendamelding: A Twitter Study of Political Preferences, Campaign Issues, and Agenda Setting in the 2012 Presidential Election."

"Agendamelding is how the audience chooses agendas from various sources, including oneself," Shaw says.

Shaw and his research team examined Twitter data consisting of 13 million tweets from August 1, 2012 through November 13, 2012, after the presidential election.

The crux of Shaw’s presentation was a comparison of this study’s results with those of his first, illustrating how the influence of mass media has declined.

Shaw’s first study on agenda-setting took place in Chapel Hill in 1968. A sample of 100 people was questioned about what issues were important to them.

"Independently, (we) analyzed newspapers, television, magazines, and everything else (in terms of media), that they had access to," Shaw says. "A study was then done of what the people said are the important issues, along with a content analysis of what the media had been relaying."

Shaw says when the two sets of responses were matched up, researchers found they agreed "a remarkable percentage of the time. In fact, the correlation was .97 with 1.00 being perfect."

For the 2012 study, Shaw says tweets containing the keywords 'Obama' and/or 'Romney' were collected; other keywords to help determine political leaning were gathered as well.

"We also gathered tweets from traditional vertical media outlets such as the New York Times, CBS News, and CNN, and Democratic- or Republican-leaning horizontal media, for example, Stephen Colbert and Rush Limbaugh," Shaw says. "We were able to compare them in terms of specific issues and how often those issues were tweeted during the course of the study."

When the data from 2012 were analyzed, the correlation was .87, which is 25 percent less than in the 1968 study. This suggests, according to Shaw, that the mass media are no longer as powerful as they used to be, partly because of the public’s use of social media.

"We are in a period of such rapidly-expanding social media, and we’re spending less time with newspapers and television, that we’re really in a period of significant paradigm shift, in terms of media use," Shaw says. "Those of us in the communications field have to learn how to deal with a moving train."