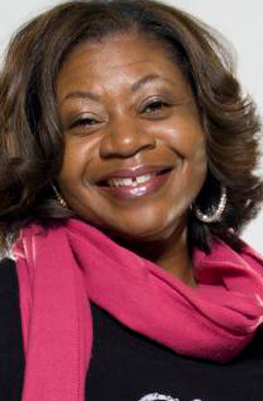 Communication department Associate Professor Donyale Padget, Ph.D., is one of five faculty selected to be a part of the inaugural class of Provost Fellows. Her year-long appointment was announced in May.

Padgett's teaching and research, which focuses on diversity, culture and communication, made her a logical choice for the group which will be focusing on campus graduation and student retention rates. The first of several campus initiatives on this issue will take place this fall in the form of a student success summit.

The fellows come from a diverse spectrum of academic backgrounds, with a stated purpose of coming up with best practices for student and faculty engagement throughout the wider Wayne State community.

"My colleagues and I are focused on student and faculty engagement. That means talking about and working on retainment and increasing the likelihood that every student connects with the university and has a positive experience," Padgett said. "How do we meet this challenge? Answering that question is why the Provost fellows were put together."

Each fellow had to propose a project focused on one of six themes during the application process, including creation of a culture of relationships and mentoring, promotion of inclusive excellence and reduction of achievement gaps, and evidence-based teaching and learning.  The Provost’s office will act as a resource for each fellow and contribute any data it can to their projects, which, combined with university-wide initiatives, creates a symbiotic relationship focused on student success.

Padgett’s current project focuses on understanding why certain groups of students do not graduate at the same rate as others, and specifically, the challenges that underrepresented minority groups face during their college careers.

"Our graduation rate for black students is 11%. Obviously, we have a problem," Padgett said. "We need to figure out why these kids aren’t graduating and what we can do as professors to reverse this trend."

Padgett started this project in Spring 2014 with a group of doctoral, graduate, and undergraduate students, and will gather her data by capturing student narratives from a wide variety of groups that she says are traditionally marginalized.

"Whether we are talking about racial minorities, LGBTQ, a first-generation college student, or people who have a physical disability, we want to hear their story," Padgett said. "We need to develop programs to help these groups. Period."

According to Padgett, some of the common issues certain groups face that she and her students have already uncovered include feelings of isolation and physical access to viable workspace. But the larger issue she says, is affecting how these students view themselves as members of the community.

"It’s not just that they don’t graduate. It’s how do I see myself?" Padgett said. "We want to develop citizens of the world and people that feel they’ve been enriched by attending Wayne State. That only happens if faculty engages them and creates a safe environment."

To achieve this, Padgett says, professors have to go beyond what they thought their job was and adapt to an ever-changing environment.

"We have to teach to the whole student, not just teaching the subject. We have to help the student connect to the material and how it translates to real world," Padgett said. "I want to be one of the veins in that web. An advocate for student success. And not just student success, but faculty engagement around student success."

Padgett says once the research phase of her project is concluded, she wants to share the findings both on campus at various initiatives, such as a brown bag event in the Humanities Center in February, as well as at the annual National Conference on Race & Ethnicity in American Higher Education (NCORE) meeting May 31-June 4, 2016 in San Diego.